What are the unique of ping pong doubles rules?

Playing ping pong doubles has lots of fun. Originally just two persons in the court becoming four, it makes the dueling lively at once. However, its rules are quite different from the singles and other ball games such as tennis and badminton. What are the differences among them?

The most special thing of the rules of ping pong doubles, making it different from other ball games, is that the players in the same team must take turns to play, returning alternately. Unlike playing badminton or tennis, one can hit many times without limitation. The two partners are often each responsible for a part of the field, sharing the defense work, but it is not happening in playing ping pong. You have to keep moving round with you partner and be very busy. The reason is the court area of ping pong is small. Without this rule, one may stand away and do nothing, making it a singles game. 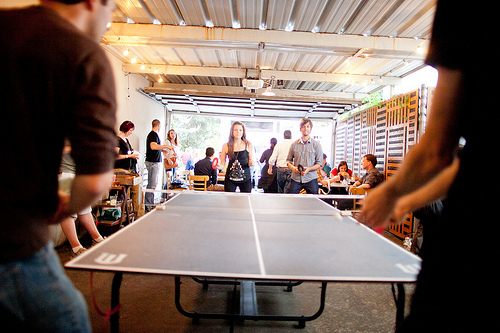 What are the unique of ping pong doubles rules?

In addition, the serve area is limited. A doubles serve must be diagonal from your right half table to the right half of your opponents. The white and thin middle line on the table is especially for doubles. It can be ignored while playing singles. It is the serve line of doubles. If your serve is across the line and be in the left half table of your opponents, you will lose a point. After the serve, there is no longer any placement restriction, the same as singles.

The complicated part of doubles is changing to receive serves. The serve times of doubles are the same as singles, changing every two points. After the same player of your team has served twice, it becomes the turn of your opponent team to serve. It must be the player of your opponent team who has just received to serve, the player of your team who has not served to receive. For example, A of AB team serves and C of CD team returns. After changing, it becomes C to serve, B to return and so on. It is so easy to get confused after playing for a while. Therefore being an umpire of ping pong doubles is weary.

Other than the above, the ping pong doubles rules are the same as the singles. Nevertheless, you can imagine that if you want to play well, you need to have great footwork. For beginners, there is one more partner standing beside. Be careful and do not hit on the head of your partner. Two teams four persons playing together, there will be much more fun and laughter. Just go try and enjoy it!