Just like many other new things, the birth of table tennis was quite fortuitous. While parents playing table tennis with children, telling them its origin, believed that it could not only broaden their scope, but also enhance their interest.

There are many different story versions about who invented table tennis. However, two points are generally accepted. First, it was not invented by the Chinese, but the English. Second, tennis derived it.

The following is the most common story. In a rainy day at the end of the 19th century, a group of university students who were going to play tennis were stuck indoor. As it was so boring, piling books on a dining table as the net, using parchment as the rackets and wrapping a cork with paper as the ball, they began playing to kill time. 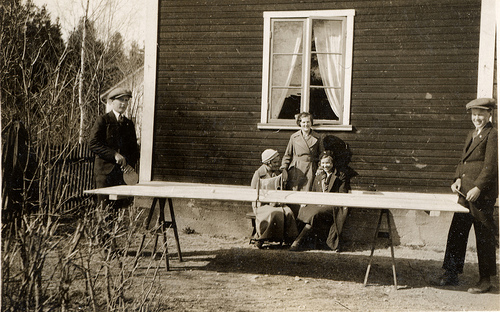 Another story version is also interesting. It was based on a Russian magazine published in 1901. In London at the end of the second half of the 19th century, two young men, who were tennis lovers, were waiting for their dishes in a restaurant. While they were arguing about tennis tactics, they could not stand the hot weather. They conveniently picked up the hard paper cover of the large size cigar box on the table and fanned themselves.

When the discussion went enthusiastic, they imitated the gestures of playing tennis. Pulling out a cork from a win bottle as the ball, using the cigar box cover as the rackets, they started to play on the dining table. The playing was getting more and more vigorously. It attracted a crowd standing in a circle and watching. Seeing this eye-popping and unprecedented plaything, the restaurant lady boss could not help crying out in surprise “Table tennis!” With this inadvertent shout, the English name of table tennis was born.

The generally accepted development afterwards was that an English man called James Gibb improved the ball. While he was travelling in America, he came across a toy ball made from celluloid with strong bouncing. Polishing it up a bit and replacing the former corks and rubber balls, he promoted it in England and all over the world gradually. Because of the unique sound the ball hitting the racket and the table, a sports equipment company being the first used the name “Ping Pong” in an advertisement. It gave rise to this nickname as well as the Chinese name of table tennis.

Which origin story do you think more reliable? Have you heard some other versions?

This entry was posted in Anecdotes and tagged Ping Pong, Table tennis. Bookmark the permalink.
本篇文章引用網址：