What Are the Unexpected Advantages of Playing Table Tennis?

Playing table tennis has countless benefits. Those commonly known are as follows:

All these benefits are good for your health, but you can get these same effects by playing some other sports. What are the exclusive benefits, which are rarely noticed, offered by table tennis?

First, table tennis is a prominent exercise of the central nervous system. It greatly enhances the adjustments of various inner systems and organs, raising the speed of mind reactions. I had not learnt this before until some parents whose children had dyslexia told me. The miracle-like effect of playing table tennis is good enough to be a therapy of improving the central nervous system and the brain coordination.

Their psychotherapists highly recommend the children suffering from dyslexia to practice table tennis. Many patients recover without medication after practicing a period of time. Therefore, many parents sent their kids to my classes as a kind of treatment, and I became a ‘half-a-therapist.’

It is no wonder that a research* conducted in China points out: 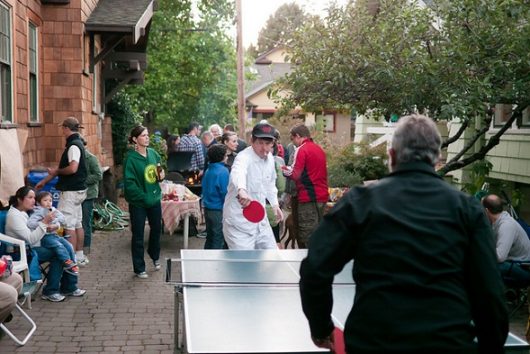 What are the unexpected advantages of playing table tennis? (Image Courtesy of flickr)

Second, the elasticity of the exercise amount of table tennis is exceptionally large, suitable for people at any ages. This is also a unique advantage. On one hand, it allows 5-6 years old little kids playing mildly against 80-90 years old elderly. They can stretch their muscles and limbs safely without worrying about getting hurt. On the other hand, just the same tiny bouncy ball, it can be severe and tough enough to make strong young adults exhausted and sweaty. Other ball games like football, basketball, tennis, badminton… etc. are easy to have the latter effect, but they are hard to have the former one.

Many people who do not understand this character think that table tennis is only a game for children. It is a big misunderstanding in fact. The higher the player’s skill level, the higher the physical capability it requires. Only the beginners can stand still without a droplet of sweat while playing. Those advanced players do in an entirely different way. The style of the world-famous South Korean national team was vigorous physical capability. Their several superstars in various generations, like Yoo Nam Kyu, Kim Taek Soo and Ryu Seung Min, all reached the standard of professional athletes, having stunning speed and explosive power.

Moreover, to have the same amount of exercise, table tennis requires the least space comparing with other ball games. For the beginners, a squash room is enough for two tables. That makes it perfect for Hong Kong’s cramped conditions. Believed the exercise amounts of snooker and darts are lower.

Do you think of any other exclusive benefits of playing table tennis?

One Response to What Are the Unexpected Advantages of Playing Table Tennis?