The most comforting result of the World Table Tennis Championships in Budapest this year should be Liu Shiwen winning the singles title. Including this time, she entered the semi-finals 6 times in a row, among those 3 times 2nd runner, twice 1st runner-up. This late bloomer has waited for over 10 years.

Liu Shiwen was from Liaoning province. She enrolled the sports school in Guangzhou when she was 7 years old. She loops powerfully both sides, quite masculine. What makes her so precious and comprehensive is that her speed drives close-to-table is incredibly fast also. However, her serve is not outstanding because the limitation of her serve grip. When she was just 17 years old, she won the National Table Tennis Championships singles which was publicly accepted as more difficult than the World Championships. She also won the Women’s World Cup at 18 years old.

When it comes to capabilities, Liu Shiwen should have got the singles title long time ago. Nevertheless, the highly unstable performance was her fatal fault. The most astonishing event was the 2012 Moscow World Team Table Tennis Championships final. As the no. 1 player of the Chinese team, against Singapore, she lost all the two points. Probably this was the one and only one time. It made the record of the Chinese team, which has overwhelming predominance, winning the title 8 times continuously stopped.

Besides, Liu Shiwen also lost to the average Singaporean player Yu Mengyu in the 2012 Macau Asian Table Tennis Championships teams final. In the qualification matches of 2016 Rio Olympics, she, as the no. 1 seed, was defeated by the young Hong Kong player Doo Hoi Kem, with unbelievably poor performance. 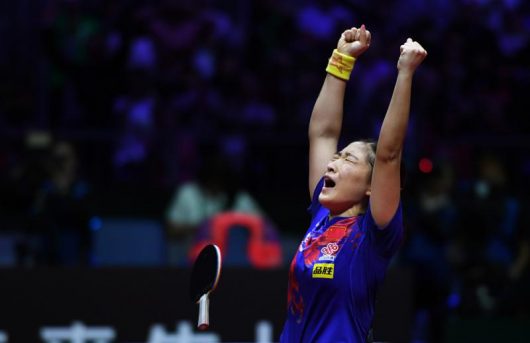 In Budapest, Liu Shiwen had brilliant and stable performance finally, winning the singles and the doubles titles. During the semi-finals against Ding Ning, she was still a bit unstable in the first 2 games. Fortunately, she was getting more concentrated afterwards and won 4 games in a row. In the 5th games, Ding Ning, who was the winner of Grand Slam and 3 times singles title of the World Championships, was beaten by 11-0. She also got two points only in the last game. In other words, she just had two points totally in the last 2 games.

Unbelievably, Liu Shiwen beat Chen Meng 11-0 again in the 5th game of the final. Facing such strong players in such important competitions, I’ve never seen a player could be as irresistible as these. They should break all the records. It seemed that Liu Shiwen would like to win back all the points she hadn’t got before in one breath this time.

Taking a broad view of Liu Shiwen in Budapest, her performance was outstanding and truly worthy of the title. It was like what she said in the after-match interview, ‘I deserve this title, just a bit late.’ She was 28 years old already, probably her last chance. Hopefully, she’ll be able to complete another unfinished wish in the Tokyo Olympics next year.