When Is the Best Moment to Call a Time-out in Table Tennis Tournaments?

In a basketball or volleyball match, there’re often time-outs, a flock of players crowding together listening to coach’s instructions. Table tennis tournaments didn’t have time-outs until about 2000, the year changing to use the 40 mini-metres big ball. Few people know that it was proposed to the ITTF by the chairman of the Hong Kong Table Tennis Association.

In a formal table tennis tournament, no matter singles or teams, in each game both sides have one chance to call the time-out. It can be asked by the player himself or the coach. The time-out opportunity can be used or not, but it can’t be saved for next game.

Table tennis time-out lasts for one minute. During it both sides players have to stay inside the area of fences, but they may go to coach seat taking instructions and drink some water, having a break. Judge’ll put a timer with a letter “T” on the calling side’s table counting the time. 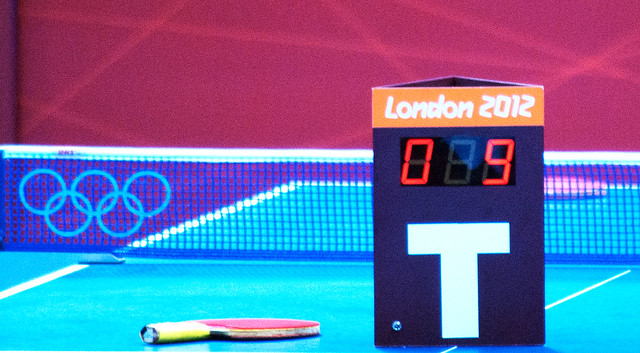 How to Make the Biggest Use

For a new comer of a table tennis tournament without a coach, his teammate or friend can act as the coach, taking the coach seat. However, when is the best moment to call a time-out? The big principle is that when the player is getting irritable, flurried or emotional, unable to perform his original standard, it’s time to make use of the time-out to let him calm down and focus again.

Besides, when the opponent has the upper hand and was dominant, it’s also wise to ask for a time-out to stop his momentum and think about the solutions. Moreover, if the coach suddenly comes up with some good tactics aiming at the opponent’s weaknesses, or correcting the player’s some strategic mistakes, a time-out can let the player know in time.

Time-out should be used at the critical moment, exerting the biggest influence on victory or defeat, of the whole table tennis tournament. If it’s utilized properly, it can have the effect of turn things around.

Article Categories : Training And Development
Why do table tennis choppers like being beaten and not hitting back?
12 Droll Quizzes of Table Tennis Rules