The competition system of the table tennis team events of Tokyo Olympics 2021 will be changed. It’ll still be 4 single matches and 1 double match, the best of 3 matches; the best of 3 games each match; 11 points each game. However, the order of the matches is different. It affects the player line-up pretty much.

Before seeing the new competition system, we better understand the old one first. This format began to be used in 2008 Beijing Olympics, only lasting for two Olympics. The largest features at that time were that a double match was inserted at the third match, and also on-the-spot line-up was adopted.

The World Table Tennis Championships should have also added a double at the third match for a short period long time ago. However, the Olympic system allowed who to play the double at the third match to be decided after the first two single matches. Furthermore, a short break for a few minutes was allowed. It also determined who to play the rest of two single matches.

At all times, the line-up of table tennis teams was decided before the beginning of the contest, including the player assignment of all the five matches. The Olympic format had something new. Theoretically speaking, the coach could see the players’ performances in the initial two matches first, and then determine who to play the double and the last two single matches. Playing it by ear was allowed and the flexibility was increased.

Besides, generally the match order design of team events will put the No. 1 players of both two teams to compete at crucial moment, saving the best part to a later time. Nevertheless, in this system, there was a chance that both the No. 1 players would never meet in the whole contest. 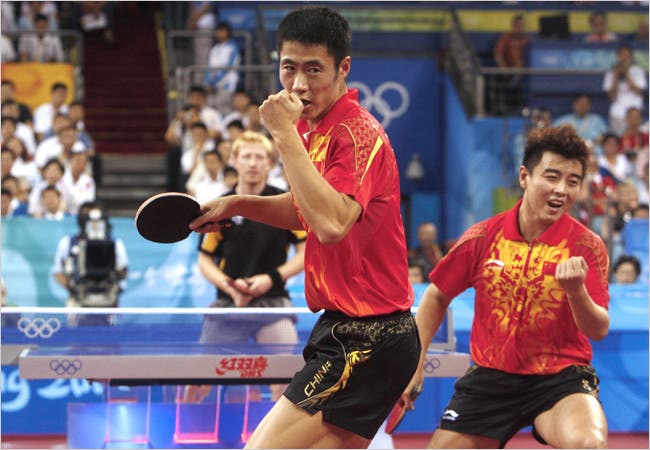 In fact, it was uneasy to make use of the flexibility allowed by this format. It’s true that there would be ups and downs of players’ conditions and performances. Nonetheless, the choices of player are greatly limited because of the third double match. Normally, a player would try two or three double partners. After the trial, he’d just focus on training one pair to cultivate understanding. Few teams would have adequate players and time to train up a few double combinations preparing for different situations.

More cases are that the players’ levels among a team are uneven and even the choices of the single player are limited, not to mention making variations. The old strong team Germany is a case in point. Ovtcharov isn’t good at doubles. Only he and Boll are competent to play the single, no more changes allowed.

Although this format had some new, it was too complicated, paying too dearly for its whistle. People with a clear mind could see that the underlying purpose of all these arrangements, inserting double and lining up on the spot, was just to increase the uncertainty, as well as the odds of upsets. After all, it was too hard to beat the Chinese team.

Knowing the old story, it’s time to see the new competition system of table tennis team events of the Tokyo Olympics. It was used in 2018 London World Cup as a trial. This new system brings three alterations──

1. The double is moved up to be the first match.

2. The No. 1 players of both teams confront one another in the second match.

3. The short break and lining up on-the-spot are cancelled, the players of all matches decided before the beginning of the competition.

From the watching point of view, the second half of the competition would be inevitably imbalanced. It’s quite a sense that everything is decided by the first three matches. Unless all the six players’ levels of both two teams are close, the last two matches will be much less attractive. In order to insert the double match, the matches of the No. 1 players against the No. 2 are sacrificed. It’s afraid unworthy. As to the burdensome and fancy lining up on-the-spot as well as short break, they should be called off much earlier.

From the viewpoints of competition and watching, in fact regardless of the new or old Olympic system, it’s inferior to the New Swaythling Cup system of the World Table Tennis Championships, or the Corbillon Cup system with a double match. The latter two are more concise, reasonable and rhythmic. The No. 1 and No. 2 players of both teams compete first, and then the two No. 1 players against one another, battling the decisive match. Nevertheless, it’s afraid that making pointless changes, as well as new equaling to better are already the style of the ITTF and the fashion nowadays.

By the way, the table tennis mixed doubles event is for the first time to be held in the Olympics. Every team can only send one pair to compete, so exciting.

What do you think about the new competition system?