Why the two sides of table tennis rubbers have to be two different colours?

According to the rules, the table tennis rubbers have to be one side red and the other black. They can’t be the same colour. Many people might ask why? What are the differences of these two colours? Why are these two and not some other colours? It was related to an interesting episode of the table tennis history.

All the functions of the red and the black rubbers are the same, no difference. All rubber models provide these two colours of your choice, like the colours of fashion. The ITTF chose these two colours, instead of yellow, green or else, because of their visibility. They were easy to be differentiated. The colour tones also inclined to dark, in order to make the eyes more comfortable. Table tennis is the fastest ball game in the world. The players need to pay full attention to the ball at all times. The colour use was to accommodate them.

In fact, before the mid-80s, the two sides of the table tennis rubbers could be the same colour. It was still the small ball age with 38 millimeters diameters. There was a wide variety of rubbers and playing styles popular in the world, such as pips-out, anti-spin, long-pips and pips-out special. Their functions were radically different from pips-in, which dominate nowadays. For example, if you push with pips-in, it’s backspin, but it’ll become no spin with anti-spin or long pips, easy to go out or high to the ceiling. 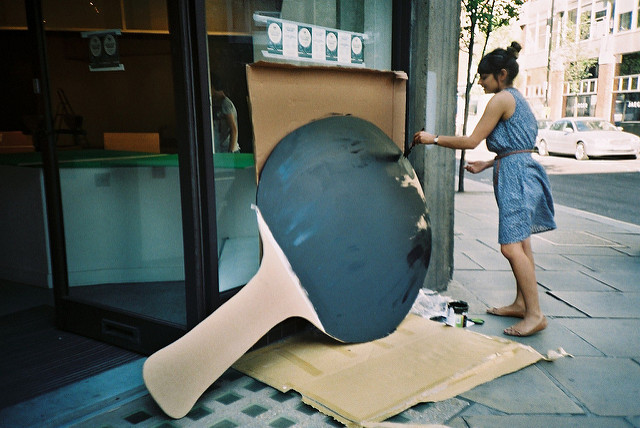 (Image courtesy of University of Russell Darling at Flickr)

Cai Zhenhua, the former Deputy Director of the General Administration of Sport of China, was still a national team member at that time. Due to the “give-way” tradition of the Chinese national team, he won the first runner-up of the World Table Tennis Championships Men Singles twice. He was the most well-known player using two same colour rubbers with huge different functions.

Using shakehand grip, his backhand rubber was anti-spin. He famously served with the same motion, twiddling the racket quickly. Because both of the two sides were black, his opponents couldn’t differentiate the rubbers at all. When the rubber touched the ball, he even stamped his feet to hide the sound, which was the last small clue. With the Chinese team’s techniques, the serves were hard enough to return already. Plus the rubber colour cover, you can imagine the receiving difficulty that could be.

The best European players in those days, including Jan-Ove Waldner, who is still publicly known as the table tennis King of the world so far, even couldn’t return Cai’s serves. They returned either high to the ceiling or down to the net bottom, extremely painful. Therefore, since the World Table Tennis Championships in 1985, the ITTF changed to adopt the current rule of using red and black rubbers only.

The Chinese and the Asian players especially liked to study these kinds of tricks in depth. Objectively speaking, it really had nothing to do with skills, too cunning. The ITTF had many rule changes about the equipment. Few of them were meaningful. It was one of them.

What do you think?

Article Categories : Rackets And Equipment
Why the Ball Higher the Harder to Hit? Introduction of Table Tennis Lob Technique
Three Common Fatal Mistakes of Table Tennis Forehand Drive
Comments (2)
Javad Ameri 2020 Jul 28 07:25 pm The ITTF has been changing the rules mostly to slow down Chinese players but as you know it wouldn't work.
Coach Cheung 2020 Aug 04 03:27 pm It seems that the Chinese team has been dominating even more after their measures.
↶