It’s a huge mistake, if you think you don’t need to move about much playing table tennis. At most it’s only correct for beginners. Just because the table is small and the ball speed is fast, it requires quicker footwork than other ball games. Mastering the five key points below, you can build up solid footwork foundation and move nimbly.

Bend Knees and Raise Heels
First and foremost, bending knees and raising heels are a necessary part of a good preparatory gesture. Many people stand straight and have their heels stuck on the ground. It’s an extremely bad habit and hard to change once formed. You’ll move very slowly. Getting ready to return, you should bend your knees to lower your weight. Also, your heels should be raised slightly, just like waiting for a whistle at the race starting line.

Shift Weight
Second, pay enough attention to shift your weight. Playing table tennis not only use your hands, but also your entire body power. The purpose of shift weight is to transfer your body power to your hands. That’s why some kids can outplay adults and some women can beat men. For instance, playing forehand smash you should shift the weight from your right foot to left foot. Otherwise, your smash power will be weak. The speed of motion return and moving will also be slow. 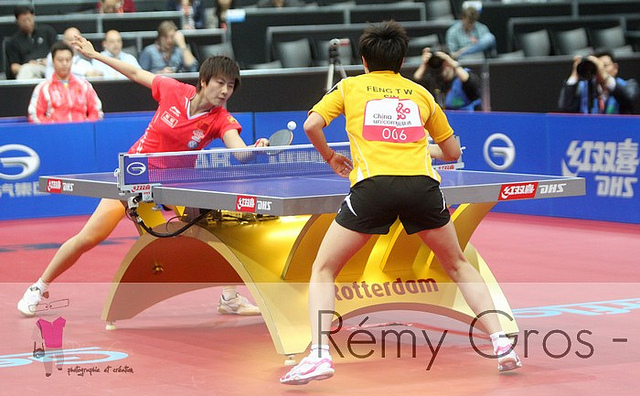 Two Steps – The Most Common Table Tennis Footwork
Third, chasing the ball with two steps. When the ball is away from your body, it’s necessary to step out after the ball. Standing still and just waving the racket are the worst response. The method of two steps footwork is to lean your weight to the direction you move first. Then two foots step on the ground almost simultaneously, the inner sides of the foot sole using power. The body soar up just a little bit and then two feet land nearly at the same time. It’s the most common footwork of table tennis. Many other sports also have similar motion, quite easy.

Stride
Fourth, stride to get in. Two steps footwork is more often used moving to the right and left sides. When the ball is in front of us, we usually use stride. It’s also starts with leaning your weight towards the direction you move. The foot behind steps on the ground first, then the front foot takes a striding step. After landing, the weight shifts to the front foot quickly and the foot behind follows through a small step, bringing the weight back to the middle of two foots. Other than moving forward, stride can be used to the right and left sides.

Split Steps
Additionally, get ready with split steps. It’s the preparatory gesture plus bounces on the toes. The bounces should stay close to the ground so as to move as quickly as possible. It’s the connection, transition and start of different types of footwork. That’s quite like the foot motion when we were going to run but not yet decided the direction while playing tag in childhood.

When you’ve done the other above-mentioned points and mastered basic skills, for example, a hundred strokes of forehand or backhand drive, the split steps should appear naturally. It’s relatively more difficult to practise deliberately. You can see this footwork easily on advanced players. If you’ve played for a long time, but you still don’t have it, then you need to review your footwork seriously.

In general, local players neglect the importance of footwork. The sense of moving is weak. Table tennis footwork isn’t difficult, but it requires lots of energy. All the above-mentioned points are simple but essential. They’re the prerequisites of advanced footwork skills. You can surpass 80% opponents by working hard to move and taking care the whole table.