Japanese table tennis veteran player, Jun Mizutan, retired earlier at age 32 last year owing to his eye illness, after winning a gold medal at the Tokyo Olympics. He achieved two medals in total, one gold in mixed doubles and one bronze in men’s team. The results were shinning. Bearding the Chinese players in their den to grab the mixed doubles medal was especially precious.

For preparing the Tokyo Olympics, Japan had racked her brains more than ten years ago to foster young players. For instance, Mima Ito and Tomokazu Harimoto, started their career long time ago. Japanese people placed high expectation on them. Unexpectedly, those rising stars didn’t bring much surprise. On the contrary, veteran Mizutani, who had been said retiring before the Olympics, had brilliant performances.

In the history of over thirty years of the Olympics, few players could snatch gold medals from the Chinese team. Although every team was only allowed to send one pair for mixed doubles this time to limit the opportunity of China, Xu Xin and Liu Shiwen were formidable with excellent records. There was no luck of Jun Mizutani and Mima Ito’s victory. Mizutani played a big part of it especially, leading the young and famous little sister Ito to step up to the podium.

It was a tough battle of Mizutani and Ito in the semi-finals against the German team. They fell behind 2-9 in the seventh game. It was astonishing to see them recovering with Mizutani’s amazing performance. If you hadn’t seen the scores, you’d have thought that they were leading ahead! 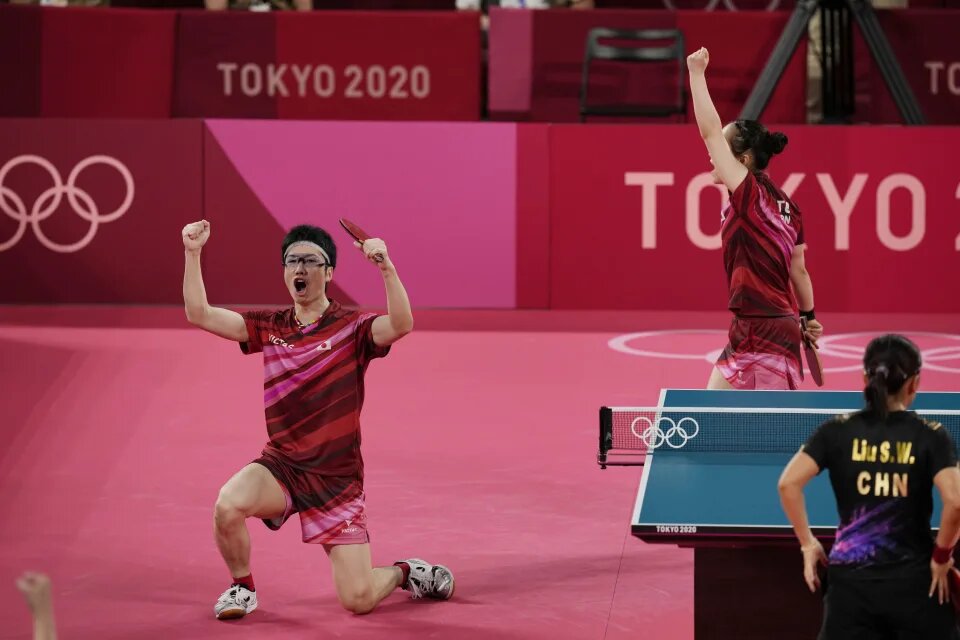 Even under the difficult circumstances, Mizutani still maintained his morale, concentration, cool, remaining calm in the face of adversity. Even though it was precious, it wasn’t rare. When those top-ranked players reach their full potential, they often enter this kind of completely concentrating their attention state, which psychologists call it “flow.”

It isn’t difficult to find some examples. In the World Table Tennis Championships, both of the two finalists of the men’s singles in 2017, Ma Long and Fan Zhendong, as well as Liu Shiwen, who proved herself finally, in the women’s singles final in 2019, all played super standard performance.

However, what made Mizutani different was that on top of it, he showed a sense of standing aloof, being free and at ease. Even at the verge of being knocked out, he was still unaffected and self-composed. Not only did he kill at full power without hesitation, but also had a slight smiling actually, while striding forward with his chin up and fighting tooth and nail. When he played fantastic strokes, he was also enjoying table tennis to his heart’s content. He gave no thought to win or loss, being above all the players and seeing the whole table tennis world proudly! It was unprecedented in my memory.

After Mizutani and Ito’s narrow escape, they played against Xu Xin and Liu Shiwen in the final. Lagging behind two games, they came from behind and took a 8:0 lead in the seventh game. In finals of top tournaments, it was rare to see the Chiense team in such a disadvantageous position.

All about Mindset in Highest Level Competitions

Among those top level players, their capabilities are on a par with one another. Whether they can bring them into full play, it all depends on their will and emotions. Comparing with skills, it’s more a competition on the─mindset.

Hong Kong swimming athlete, two silver medals winner of Tokyo Olympics, Siobhan Bernadette Haughey, made a comment out of personal feeling in a TV interview after the matches, “I think competitions often 80% depends on mentality, only 20% physical strength…” It went right to the heart of the matter.

If it’s the case of swimming particular about physical agility and large joints, let alone dealing with the table tennis ball less than 3 grams weight? The mindset and emotions Mizutani showed this time was invincible. It was even better than he beat Xu Xin in men’s singles winning a bronze medal at the Rio Olympics last time. He was wary and it was incomparable this time. No one should blame Xu Xin and Liu Shiwen for their losing.

Achieving this level of state, other than the player’s calm and cool, it also relies on his nature, faith, self-cultivation, as well as the attitude towards win and loss.